Electrochemical compression of hydrogen is based on the following mechanism:
Hydrogen is supplied to the anode side of the membrane surface where a platinum-alloy catalyst splits the molecule into protons. The electrons are transferred via an external circuit to the catalyst layer on the opposite side of the proton exchange membrane (PEM).

The current enables the transport of hydrogen against its concentration gradient, from low pressure on the anode side to high pressure on the cathode side in a single step. The take-home message is: one electron equals one proton, equals half a hydrogen gas molecule. 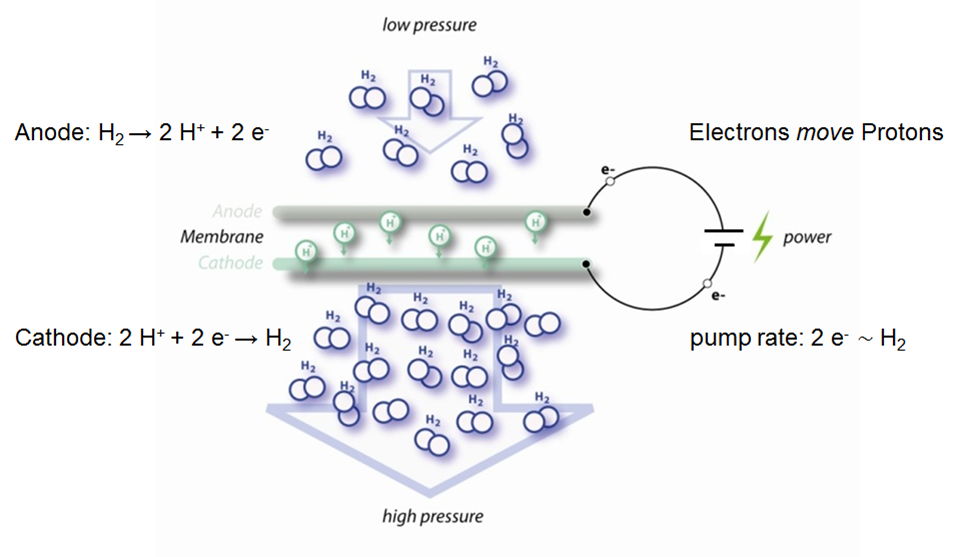 As the (PEM) membrane is only permeable for hydrogen protons and acts as a barrier for other components in the gas. In this way, hydrogen can be extracted to fuel cell purity from mixes containing nitrogen, methane, argon, water (vapor), etc.

The core of our compressors is a series of compression cells that each act as an individual compressor and together form a compression stack. Currently, stacks have a capacity of 10 kg/day. HyET is currently developing stacks that can compress 50 kg/day of hydrogen up 1000 bar.